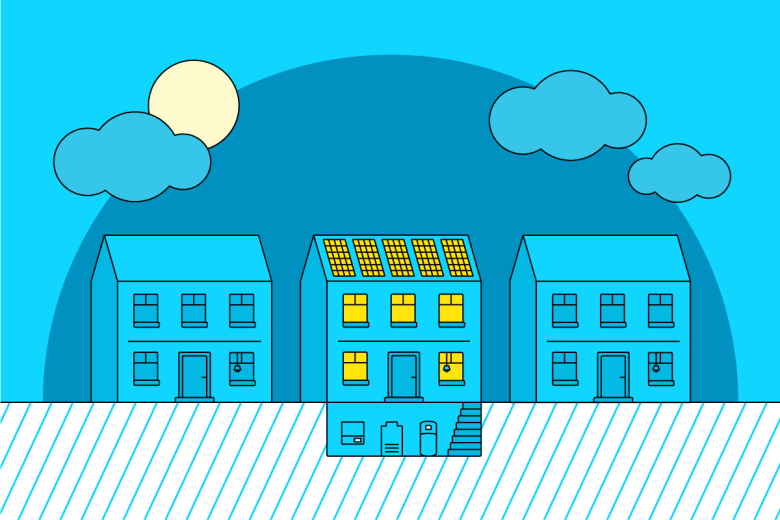 Emergency Power or Backup Power: The Solutions to Power Failure

More supply security for the domestic needs: self-consumption systems, i.e., PV installations with battery storage systems, can supply energy to important appliances in the event of a power failure. Most manufacturers offer a backup power or emergency power function for this purpose. What do these terms actually mean? Do we need to classify them further?

For a long time, we at Memodo only distinguished between emergency power and backup power. But we gradually realised that the terms are often misunderstood and that there are no uniform definitions in the industry. Additionally, a new generation of hybrid inverters has arrived in the market, which already have a small inbuilt backup power function, thus challenging the original definitions.

This is how we define

In order to shed light on this, and even literally, we adapt our definition and continue with backup power, backup power light and emergency power socket. Plus, there are off-grid systems and an uninterruptible power supply (UPS). Here, we will generally summarise the topic under the umbrella of “emergency power”. With this structure and our new definitions, we can better evaluate the products of our manufacturers for their functional scope and present them transparently.

Emergency power is the term used in everyday life and the umbrella term for all other options. From now on, we will also use this term as an umbrella for all options.

Backup power can continue to supply energy to all rooms of a house in the event of a power failure. The switchover in case of a power failure must be automatic. Typically, this variant requires a switching device at the grid connection point. This is installed between the meter and the house distribution board. However, large, 3-phase appliances cannot usually be used here either.

The 1-phase solution with phase coupling is also placed under backup power. In case of a power failure, all 3 phases are then connected in parallel. Even with 1-phase inverters, the entire house can continue to be supplied with energy in this way. In this case, the phase performance is usually even greater. 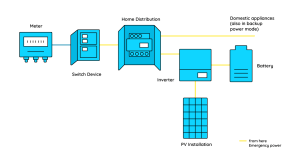 Structure of a Backup Power System

Most manufacturers offer hybrid inverters with an integrated switch device. Here, too, the following applies: Switchover in case of a power failure must run automatically. In contrast to backup power, not all rooms are supplied with the energy, but only the selected network. For example, the study, the pantry with freezer and the television in the living room can continue to be operated.

You save an added switching device here. The loads of the emergency circuits are permanently “looped through” the inverter. This means that the current for these loads always flows through the inverter, regardless of whether there is a power failure or not. Greater effort could be required for in house wiring distribution. 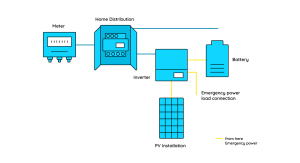 Most battery and hybrid inverters offer a connection for a power socket, often in addition to the backup power. In the event of a power failure, users have to switch manually. In most cases, they can only plug in one device. While this option is definitely the simplest, it is often enough to qualify for many funding programmes.

Unlike the backup grid, an off-grid system never has a connection to the public grid. Each system must be planned individually. In addition, the inverter power must be matched to the consumer power and must also be able to handle high power for short periods. Here you should pay attention to the manufacturer guidelines for planning. Our storage overview does not cover off-grid systems, as you have to tailor them individually.

A UPS prevents a voltage drop and ensures, for example, that a server can continue to run in the event of a power failure. In contrast to a classic emergency power system, these systems reduce the switchover time to a few milliseconds. Usually, PV systems are not certified as UPS systems because the inverters cannot manage the switchover times.

UPS systems usually only bridge a few minutes to allow for a controlled shutdown. If an emergency power system is installed, however, operation can be maintained until the power failure is remedied.

Emergency power systems are becoming increasingly relevant for many households. The manufacturers have reacted to this and almost all hybrid inverters have now emergency power function. This means that a backup power or a backup power light can be set up easily and cost-effectively, especially for new systems. There is also a sensible solution for existing systems with the right battery inverter. So, storage on, lights on!

Josef is passionate about photovoltaics and electricity storage. He studied Renewable Energies and Systems Engineering at the Munich University of Applied Sciences and sharpened his know-how in the trades. Before joining Memodo, he was drawn to the automotive industry. Josef is our commercial storage: expert and supports Memodo customers in planning and design.